A Finely Balanced US Senate

Home Our Blog A Finely Balanced US Senate
Share this page

Headlines this week were dominated by events in the US. We witnessed unedifying scenes broadcast from the US Capitol Building. While the images broadcast from Washington were dramatic, more pertinent developments occurred earlier in the week for investors. The Georgia Senate run-off election concluded with Democrat victories in both available seats, posing questions for market participants.

We look at the significance of the result and its potential influences on markets and the US economy.

Before delving into the market reaction and outlook, it is crucial to give context to the result in Georgia; After November’s Presidential election, it appeared likely that Democrats would retain control of the US House of Representatives and gain the White House but remain the minority party. The inability to capture the US Senate would have denied them a full sweep of the US Executive and Legislature. However, the probability of Democrats emerging victorious in both Senate races started to improve, and growing momentum carried them over the line.

The Democrat victories in Georgia mean each party now holds 50 seats, i.e. no clear winner. The inconclusive result may make you think Washington gridlock will resume. However, the US constitution provides a neat solution to the problem. In their (mostly ceremonial) role as President of the Senate, the vice-president can cast a deciding vote to break a tie.

The power granted to the vice-president effectively means the Democrats can rely upon the newly elected Kamala Harris to vote in their favour and break any deadlock.

The ability to do so could reduce the political gridlock that has existed for much of the last decade. President Biden will have the ability to effectively coordinate legislative efforts with Congress given his party now controls both Houses.

For investors, the most pertinent issues relating to the late Democrat clean sweep are:

We examine how markets responded in the immediate aftermath of the news below.

The graph below depicts the yield on the US 10-year Treasury; remember, bond yields move inversely to prices, so as bond prices fall, yields rise.

In this context, bond yields rising indicate that bond investors are demanding a higher return to be compensated for the possibility of higher economic growth potentially driving up inflation.

From the chart we can observe that yields this week breached 1% when the result became apparent, a psychologically significant level and the highest since March of 2020. The rise continued throughout the week, reaching 1.08% by Friday morning. Interpreting these moves is fraught with difficulty, but it is our job to interpret them.

At the margin, we suspect market participants viewed Tuesday’s results as increasing the likelihood of points 1 and 2, mentioned in the previous section, as being increasingly likely. The thinking goes as follows – a significant fiscal stimulus package will buttress the economy and allow inflation to surface.

Graph 2 displays this effect differently by depicting the US inflation break-even rate. Investors use the US 10-year break-even rate as a proxy for market inflation expectations. It is calculated by taking the difference between the US 10-Year bond yield and the real yield of an inflation-protected US Treasury of the same maturity. 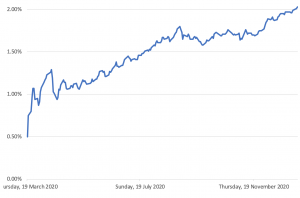 Graph 2 depicts how the break-even rate had fared since March, when COVID-19 began to affect western economies seriously. Upward momentum was mainly aided by the extraordinary efforts of the Federal Reserve’s monetary easing and the fiscal aid provided by Congress.

Tuesday’s result helped to provide additional momentum. We can see that the break-even rate rose to over 2%; its highest level since the summer of 2018. It is important to stress again that this is an indicator of future price levels instead of the inflation rate today, which is much lower.

Before last November’s election, many commentators spoke about a dramatic leftward lurch in US economic policy, which required an overwhelming victory Democrat victory. However, this scenario worry ebbed away as investors expected the Republican party to retain control of the Senate.

With the result in Georgia producing a Democratic clean sweep, investors are again contemplating an emboldened political left implementing economically radical policies. Our view is that such an outcome is unlikely for several reasons.

Firstly, despite Senate Democrats’ ability to call on the vice president to break a tie forced by obstinate Republicans, the power is only sufficient if Senate Democrats vote as a unified bloc. All fifty Democrat senators would have to act in the same way, but many centrist Democrat senators would baulk at anything they view as moving too far leftwards, such as the large parts of the much-vaunted Green New Deal.

Secondly, and related to the above, the parity of senate seats is more likely to embolden centrists within both parties who are willing to compromise and work with the other side to find acceptable resolutions to problems.

Finally, President-elect Biden is ultimately a moderate and still enjoys long-standing relationships with many Congressional politicians from his long career on Capitol Hill. Therefore, a more harmonious relationship between the White House and the legislature could emerge.